On Quitting a Good Poker Game 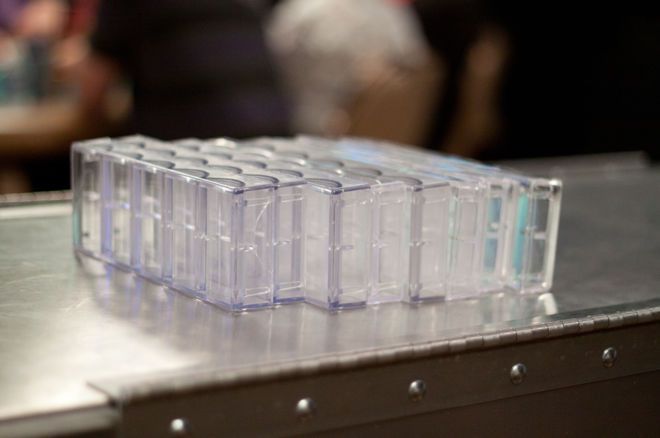 I was pretty happy with how I played the hand. I had been in an "active" $3/$5 no-limit hold'em game for a couple of hours. By active, I mean the player in the cutoff had straddled to $10, and according to the rules in this club, the button was next to act. The guy on the button put out a dead raise to $20 before the cards were dealt.

The "Let's Gamble" light above our heads was lit.

in the lojack position (three in front of the button). The original straddler and blind raiser both called. The flop was a favorable

I glanced left and saw that the original raiser was reaching for chips, which was all I needed to check. He bet $100 into the $260 pot. The blind raiser, who likes a good gamble, promptly shoved for $600. I started with $1,000. There was enough dead money in the pot that I didn't want the straddler to get his equity — I shoved in the rest of my chips. He agonized but finally let his hand go.

As is my wont, I promptly tabled my hand. After the dealer put out the river card, the button checked his cards twice and then mucked them. That put me up $1,000 for the afternoon.

A couple more orbits passed without incident. The game continued to be awesome. But I had a surprising thought:

"Should I quit this very good game?"

Satisfaction comes in various forms. I was proud of my play on the big hand, and understand that if my opponent had hit one of his outs (whatever they were) that wouldn't have meant I played poorly. But there is also joy in playing a session well and seeing it reflected in the dollar outcome.

When you have a session of good play with good results, it's fine to wrap a bow around it if that's what will give you the most happiness.

I grant that if you're a working pro, this may not be a viable option. Your job is to put in hours at the table, ignoring hourly, daily, and sometimes weekly results in pursuit of the monthly and yearly outcome. They call it "grinding" for a reason. But if you are a recreational player or even a semi-pro, quitting a good game is an enviable luxury in which you should take no shame.

What did I do? As I was contemplating my options, an important thought struck me. If I was thinking about quitting the game, it was definitely time to quit the game. I stood up, grabbed a couple of racks, and began racking up my chips. Three hands before the blinds got to me.

Did they say something about me after I left? I didn't know or care. I was too busy enjoying the California sunshine and the newly found money in my pocket.

Lee Jones can teach you to quit, even to quit good games. Go to leejones.com/coaching and schedule a free coaching consultation. Lee specializes in coaching low-stakes cash game players.

How to Win at Slots: How to Pick the Best Slots to Play and Win More

Thinking About Lines Used by Pluribus the Poker Bot, Part 1