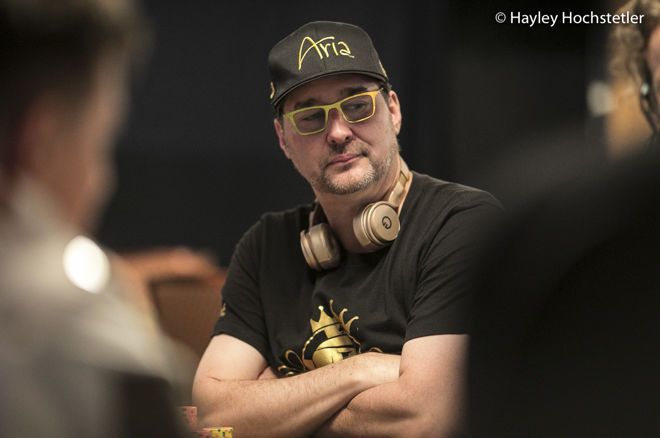 As the 50th annual World Series of Poker wound down on Tuesday in the Amazon room of the Rio, the energy was palpable as the final three played down to a champion in the $10,000 Main Event. On the other side of the room, three other events were winding down with the final four bracelets of the 2019 WSOP to be awarded by the end of the day's play.

Among the remaining players was the all-time bracelet winner Phil Hellmuth, who was in contention in Event #89: $5,000 No-Limit Hold'em looking to go back-to-back after winning bracelet No. 15 in the same event last year.

It’s my birthday, and I have one wish for the day: WIN A @WSOP Bracelet!

Hellmuth wouldn't get his birthday wish as he fell in sixth place for $94,899 after a rather swingy day, but all in all, it was a pretty good day for the birthday boy.

Hellmuth came in to the day in 24th position of 44 players remaining and ended up sitting third in chips with two tables remaining.

The first hand that propelled Hellmuth came at the expense of Sam Ganzfried. With blinds at 40,000/80,000 with a big blind ante of 80,000, Ganzfried limped in from the small blind with about 400,000 behind. Hellmuth was in the big blind and shoved all in.

"This fucking guy. He's been all in ten fucking times..."

Ganzfried snapped him off, tabling

and the dealer put out a flop of

. It looked relatively safe for Ganzfried until the

hit the turn to give Hellmuth a gut-shot straight draw. Sure enough, the river was the

and Hellmuth made his straight to send Ganzfried to the rail in 12th place.

Bring the best Vegas games to your home!

Challenge a dealer at Casino Hold'em or Three-Card Poker...from home!

Use the welcome bonus to play Vegas-style!

. Hellmuth shoved all in and Kamphues snap-called with less chips. Hellmuth had run into aces again, this time holding

Unfortunately for the Poker Brat, he couldn't hunt down the aces this time with the board running out with the

to leave Hellmuth with just four big blinds with 10 players left. "This fucking guy," said Hellmuth. "He's been all in ten fucking times..."

Anyone who has seen Hellmuth play knows the leading bracelet winner is never out of the game. He proved this once again, mounting an epic comeback to make a run at the title defense. First, he got it in with king-deuce against David 'ODB' Baker's ace-queen, with Baker flopping the nut flush draw to go with his overcards. The poker brat rivered an off-suit king to double, followed by another double with ace-queen versus ace-ten suited a few hands later.

At the official final table (9 left) of @WSOP No Limit Hold’em Turbo! My third final table in this event in four y… https://t.co/FdIkx42NIC

Hellmuth couldn't keep it going though and proceeded to fold until he was down to just under three big blinds. In his final hand, Hellmuth put the majority of his stack in the middle from under the gun, and Tony Dunst asked for a count before moving in over top. Hellmuth called off and tabled five-three suited, up against Dunst's ace-ten.

Hellmuth flopped a wheel draw and nailed it on the turn, but the same card also gave Dunst two pair with aces and tens. The river was another ace and Dunst filled up to send Hellmuth to the rail in sixth place.

Despite not being able to lock up another bracelet, Hellmuth was in good spirits following his elimination, shaking the hands of all of his tablemates. He even joked about going back to the WSOP Main Event break desk, which he indeed did. "I know one person that will be happy! Where is Mori! Now I can do the f**king ESPN stuff!"

Having a blast at the @WSOP breakdesk with these two pros. Thanks for making my job easy, @MariaHo and birthday boy… https://t.co/6sII3HU3jK

Hellmuth's summer WSOP may be over, but he can look back and be proud of yet another tremendous showing. The Poker Brat cashed a total of 12 times including a final table online and one live.

Check out all the best Casino Poker games to play online!

Use the welcome bonus to play Live Hold'em with a dealer.