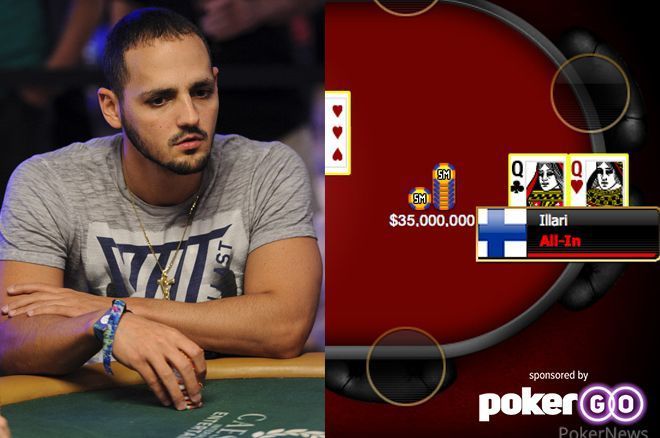 After 11 and a half hours of online action, Nicholas "Illari" Baris emerged as the winner of Event #68: $1,000 WSOP.com ONLINE No-Limit Hold'em Championship.

He defeated a field with a total of 1,750 entries for a whopping grand prize of $303,738.75. It's the first WSOP Bracelet for the Utica, New York native, with his previous most significant online WSOP result being an eighth-place finish in 2018 in a PLO 6-handed tournament.

The final table consisted of several well-known players including David "Bakes" Baker playing as "YoungPitts" (4th place for $96,902.50) and Chris "Camdi" Ferguson who was competing in this tournament on his iPad while playing and bagging in Event 66: $1,500 Limit Hold’em at the Rio All-Suite Hotel and Casino at the same time. He enjoyed quite the run on the virtual felt as he finished in seventh place for $38,736.35.

Tara "bertperton" Cain, winner of an online WSOP circuit ring and runner up in the 2017 WSOP High Roller Online Event, was the star of the show for much of the night as she gathered an overwhelming chip advantage. At one point she had double the stack of her closest competitor and nearly a third of the chips in play with sixteen players remaining. She would take this big lead further with almost half the chips in play as the final table started, eliminating many of the final table competitors.

When heads up play began, Cain held more than seventy percent of the chips with a 27 million to 8 million-chip lead. But this is when Nicholas "Illari" Baris made his move. He chipped away at her advantage slowly and got a double up when his pocket tens held up against her ace-nine.

Just a few minutes after the double, Baris would take a very slight chip advantage, the first time that Cain had not been the chip leader since before the final two tables.

Baris did not need the lead long before he finished it off. In a sudden turn of events, he found himself all in with pocket queens against the pocket nines of Cain, needing only for his ladies to hold for him to take the bracelet. And hold they did, as the board ran out clean and just like that he was champion. Cain was unable, but Baris had won the WSOP bracelet.

Pokernews will be on hand to cover the rest of the online WSOP.Com bracelet events, as well as every bracelet event at the felt for the duration of this 2019 World Series of Poker. You can find all updates in the PokerNews WSOP Live Reporting section. If you want to read back how this event went from 1,750 entries to a winner, check out the dedicated live reporting pages for this event.

Online bracelet events aren't streamed, but a ton of other final table from this year's WSOP are! Check out PokerGO.com and sign up.

Five Codes to Get Free Spins at PlayAmo