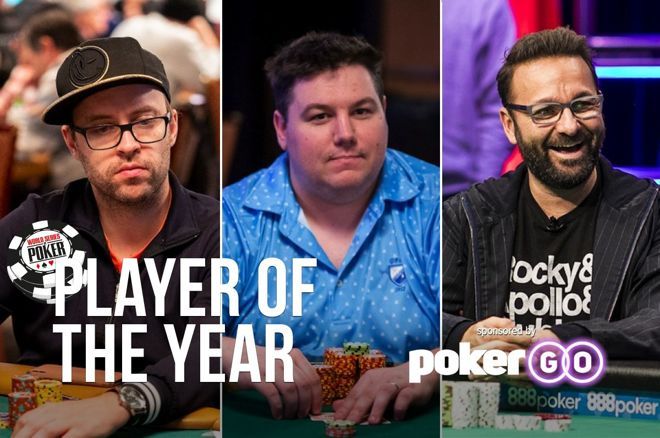 The last of the record 90 bracelet events at the 2019 World Series of Poker has completed, which means it is time for one final update of the 2019 WSOP Player of the Year race — for now, at least.

Robert Campbell was the only player to win multiple events at the 2019 WSOP in Las Vegas, and thus it is only fitting he ends the summer in first position on the POY leaderboard with 11 more bracelet events at the World Series of Poker Europe still to come later this fall.

Meanwhile a couple of previous WSOP Player of the Year winners — Shaun Deeb (who won in 2018) and Daniel Negreanu (who won in 2004 and 2013) — picked up points at the finish to challenge Campbell's hold on the lead.

Neither Deeb nor Negreanu won a bracelet this summer, but both came close multiple times. Both also cashed a lot — 17 times for Deeb and 16 times for Negreanu, just a couple behind Chris Ferguson who accumulated the most 2019 WSOP cashes with 19.

Here's how the 2019 WSOP POY Top 10 appeared following the last update of the summer:

Before Campbell's surge, Dan Zack had the POY lead for the first half of the 2019 WSOP, and he ended the series in fourth position after winning Event #6: $2,500 Mixed Triple Draw Lowball for one his of 14 cashes.

Phillip Hui is at No. 5 thanks in large part to his win in the Event #58: $50,000 Poker Players Championship for a seven-figure score, the biggest (by far) of his 10 cashes for the series.

Jason Gooch who won Event #55: $1,000 WSOP.com Online Double Stack No-Limit Hold'em after finishing second in Event #24: $600 WSOP.com ONLINE Pot-Limit Omaha 6-Handed won by Josh Pollock, is next on the list at No. 6.

Filling the next two spots are players who like Negreanu enjoyed a late series push up the rankings during the final week.

Joseph Cheong who earlier won his first career bracelet in Event #34: $1,000 Double Stack No-Limit Hold'em cashed a couple more times and made another final table to move up to No. 7. And David "ODB" Baker who collected his second career WSOP win in Event #66: $1,500 No-Limit Hold'em nearly made two more final tables during the last week to end the summer at No. 8.

Rounding out the list, two more final-week cashes kept Ferguson on the list at No. 9, while Anthony Zinno, winner of Event #60: $1,500 Pot-Limit Omaha Hi-Lo, currently resides at No. 10.

Dario Sammartino isn't too far behind those players at No. 19 after having finished second in the World Series of Poker Main Event won by Hossein Ensan. Had Sammartino won, he would have jumped to No. 4 on the list just behind Negreanu.

Meanwhile the Main Event win was Hossein's only WSOP cash of the summer, giving him enough points (1,730.84) to land him at No. 53 in the POY rankings.

About the 2019 WSOP Player of the Year

After changing the way POY points were calculated prior to last year, the WSOP has kept the same formula to determine this year's winner. The formula is "loosely based" on the one employed to calculate WSOP Circuit rankings, with modifiers based on buy-ins and field sizes.

At the time, the WSOP explained the changes had been made "to better reward bracelet winners and players who run deep, while still rewarding consistency." A couple of differences from the pre-2018 system include a bigger gap between points earned from first- and second-place finishes, and min-cashes being worth relatively less than was the case before.

Here's an information sheet provided by the WSOP that provides further details regarding the 2019 WSOP Player of the Year.

The 2019 WSOP POY race isn't over. After accumulating points in all 84 of the "open" bracelet events from this summer's WSOP in Las Vegas, 10 more events in the 2019 WSOPE series taking place in Rozvadov, Czech Republic later this year (Oct. 15-Nov. 4) will count as well.

We'll pick back up our watch on the race here at PokerNews in October. Meanwhile you can see the entire Top 100 over the constantly updated WSOP Player of the Year page.

Check out archived coverage from many 2019 World Series of Poker events on PokerGO.

Gambling on Tinder: What Are the Odds You'll Get a Match?