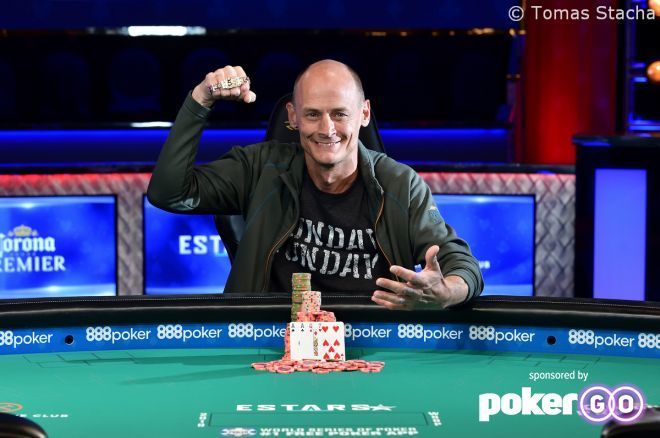 It was McMaster's first WSOP cash and right away his first final table. When asked about the lights and the stage he told PokerNews ''It was very surreal to me, I've just been on cloud nine since last night, just happy to be here and enjoyed playing with these guys''.

McMaster brought a lot of friends with him to the final table and the entire rail around the feature table stage was occupied. ''We have a lot of poker players in town for whatever reason, and they just happened to be here today which I'm happy for!''

Seven players returned for the final day of the tournament. The first four-card bracelet of the summer was on the line. Three bracelet winners were still in the tournament at the start of the day but it didn't take too long for the first to fall.

Three-time bracelet winner Yu was the first player eliminated. He started the day sixth in chips but he wasn't able to realize a comeback. Yu busted out in seventh place which earned him $27,530.

Tom McCormick was up next to exit the tournament. McCormick sits in third on the list of players with the most amount of cashes but without a bracelet. This final table was McCormick's 15th at the World Series of Poker but he has yet to finish at the top in one. The sixth spot on the leaderboard was the highest McCormick reached in this one and he took home $37,063 for his deep run.

Joseph Aronesty (5th - $50,646) and bracelet winner David Halpern (4th - $70,231) both missed out on the heads-up, just like another WSOP gold bracelet winner. John Esposito won a bracelet twenty years ago but he wasn't able to add another to his collection when he busted out in third place against eventual runner-up Berilgen. Esposito did add another $98,807 to his already $1,206,121 WSOP earnings.

The heads-up didn't take too long and McMaster was in control the entire time. Berilgen did win a big pot but he didn't manage to take over the lead. He eventually lost a big pot that left him with one big bet and he lost that the next hand to the new WSOP champion.

PokerNews coverage of the 2019 WSOP continues with updates from several other events, all of which you can follow here. The next event up on PokerGO is the $50,000 High Roller Final Table starting at 1 p.m. June 3rd.

Which Casino Game Has the Best Odds?